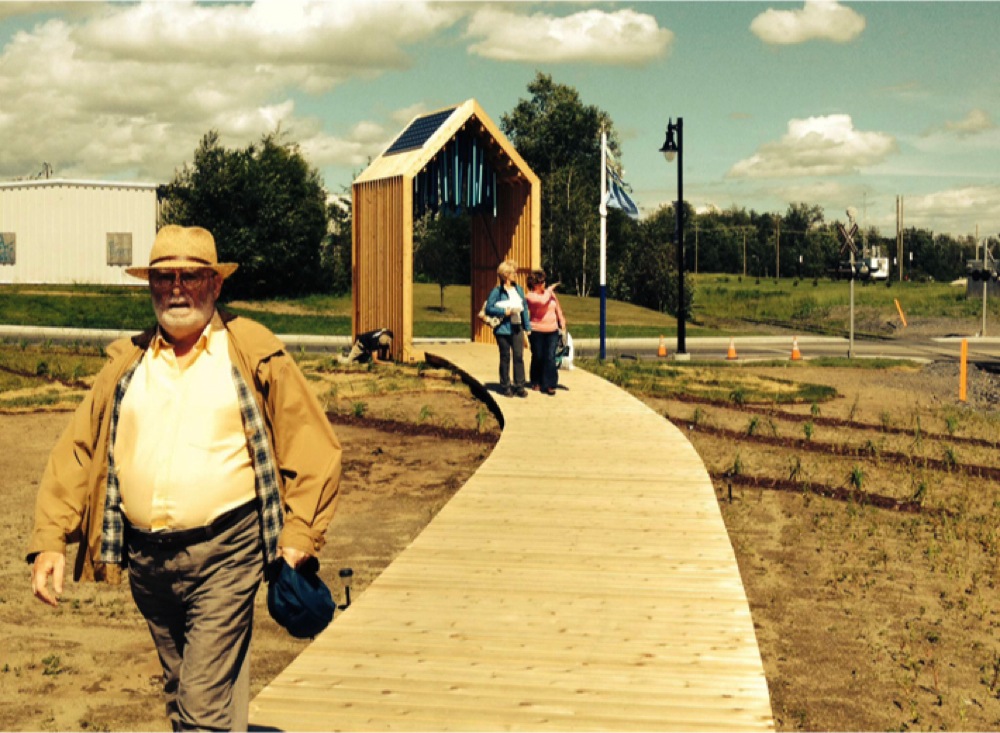 Helping a city reinvent itself
La Marche du vent is a commemorative path created for the town of Lac-Mégantic. The town sadly gained notoriety on July 6, 2013, as a freight train derailment of 72 crude oil tank cars caused a massive fire within its downtown area; an ensuing blaze led to the loss of 47 lives.

As the town rebuilds, La Marche du vent is a narrative path that aims to reconnect Lac-Mégantic to its new town centre. Under the theme ‘Reinventing the city’, the projects aim is to gather, to amplify the existing, and to imagine the future.

The first is a raised wooden boardwalk that contours the railroad track and cordoned off downtown area, and leads to La Maison du vent. Angled to face the Lac-Mégantic lake and wind corridor distinct to the area, La Maison du vent provides a vantage point onto the ravaged downtown area and the Ste-Agnès Church, which became an important gathering point after the crash. Hung at its canopy, 79 wind chimes emit soft sounds and create a calm space, allowing for a moment of introspection to those who walk underneath it.

The second is an area of rediscovery of the history of Lac-Mégantic and a call to civic responsibility by way of a story board display. Titled La Maison des histoires, five distinct historical moments highlight the strengths of the local community. This display of societal building blocks allows for its present-day citizens to take strength in the past, in order to inspire a stronger future.

The third area, L’Aire de détente, is a social space where six giant hammocks allow for connectedness between passersby, as well as provide a unique setting to observe the reputable starry sky of Lac-Mégantic. As a complement to this resting space, local restaurateurs can provide picnic baskets and essentials to interested visitors. A local map with different resting areas has been created to allow for the discovery of new spaces for both residents and visitors alike.

For this small community, moving forward has been both an essential and delicate matter. In order to ensure the path would resonate with residents as much as possible, we created workshops throughout the different development phases of the project. This collaboration also aimed to provide them with a sense of ownership and openness onto the paths creation.

Giant colourful flags punctuate La Marche du vent in order to guide passersby onwards and onto the three distinct areas. Part restorative path and part interactive experience, the path aims to help this community engage, grow stronger, and create new rituals in the face of such a tragedy. 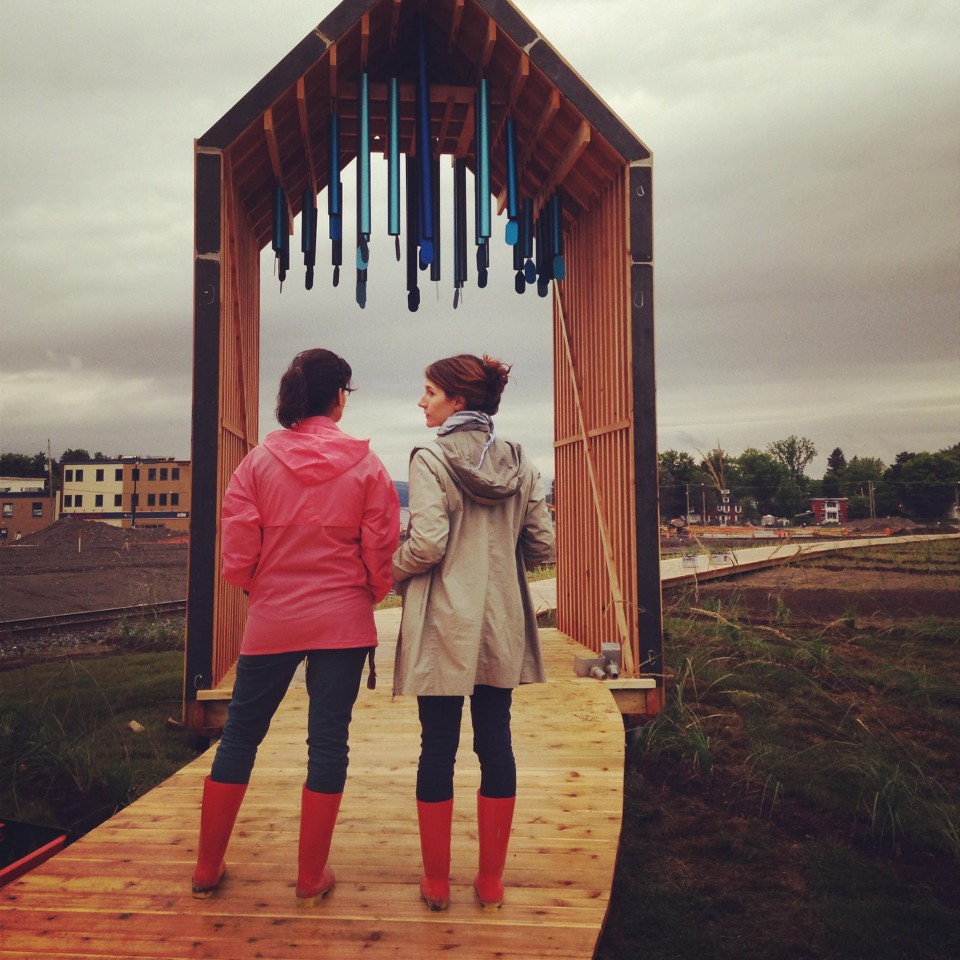 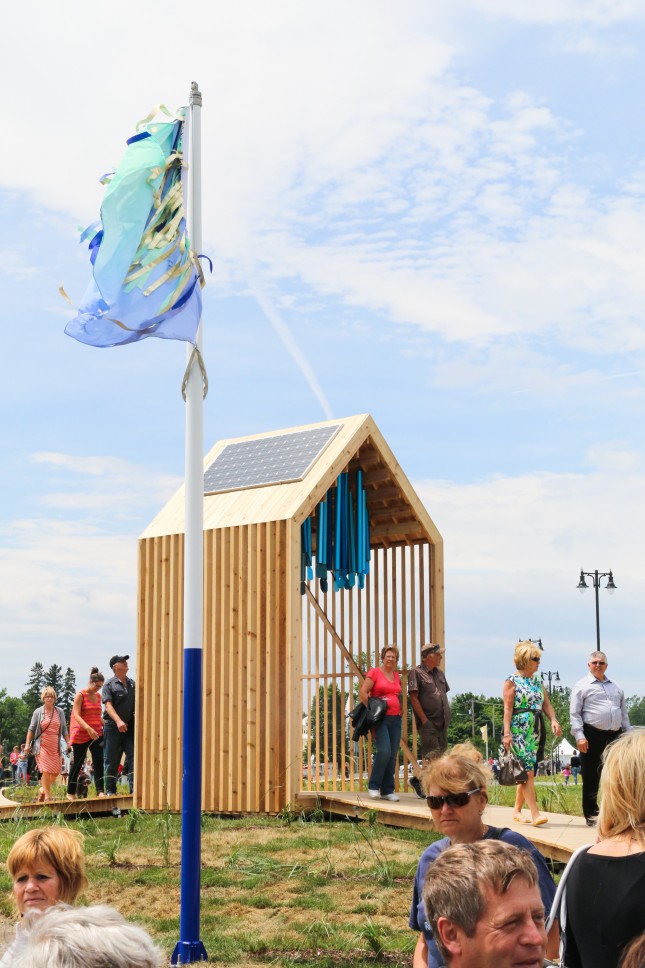 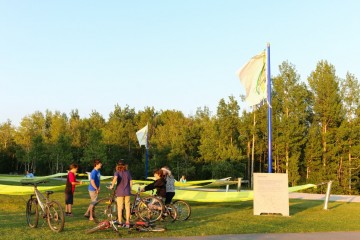 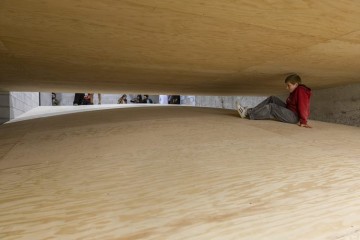